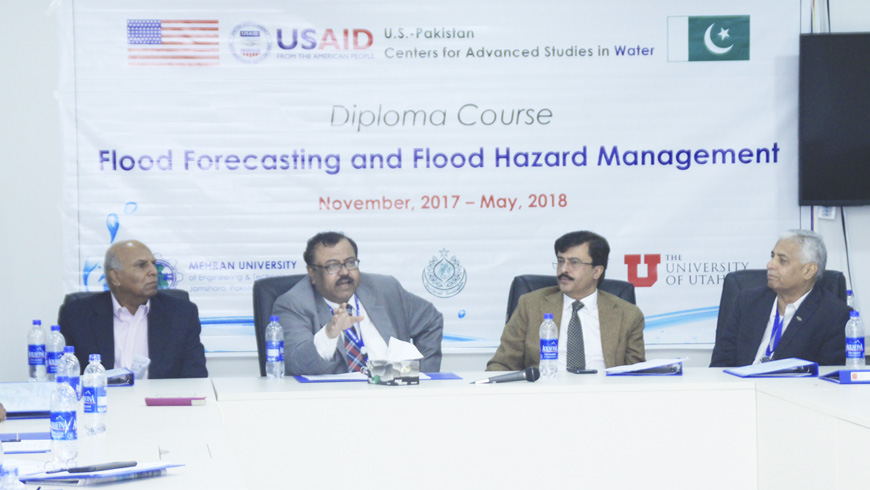 Sindh Secretary of Irrigation Jamal Mustafa Syed said that being located at the lower Indus basin, the people of Sindh province especially the people who related in the water sector must have to learn water laws and contribute in formulating provincial water policy, this he said while speaking in the inaugural ceremony of six month diploma course in flood forecasting and hazard management in the conference hall of U.S.-Pakistan Center for Advanced Studies in Water (USPCAS-W)  at Mehran University of Engineering and Technology (MUET) Jamshoro on Wednesday. He said that irrigation department is looking forward to the USPCAS-W for filling the technical capacity gaps by imparting sophisticated training to the nominated officers of the department through the diploma course. The diploma course is a part of Memorandum of Understanding (MoU) of Rs. 41 million rupees under cooperative agreement signed between MUET and Sindh Government on Capacity Building of Officers/ Officials of Sindh Irrigation Department in September 2016. The six-module diploma course was specially designed for the capacity building of the concerned officials in consultation with professors from American Universities which includes the University of Utah and the University of Nevada, Las Vegas also the resource persons from the mentioned universities will conduct the training sessions in the diploma course which will end in May 2018. The secretary who himself was MUET graduate said that this inaugural ceremony provided him an opportunity to visit the alma mater and wished he could be among the participants in the diploma course. He emphasized the nominated officials to get the maximum benefit from the diploma course and then work efficiently in the field. He thanked the management of MUET and University of Utah for putting all possible efforts in enhancing the capacity of the Center.

On this occasion, Vice Chancellor MUET Dr. Mohammad Aslam Uqaili speaking in the ceremony said that in today’s technological era, the academia has to play a major role to promote Technology Venture Commercialization (TVC) by undertaking applied research in different sectors. “Universities are now not limited only to produce the graduates but to play an important role in creation, application, and integration of knowledge”, he added. He said that the diploma course will contribute in the framework of University-Industry-Government, which represents triple helix model of effective relations among all of three sectors, but now the community as the fourth stakeholder has been added making it quadruple helix model. Dr. Uqaili said with the generous support of American People under the auspices of United States Agency for International Development (USAID), the water research center has been established in MUET after competitive process, is technically supported by University of Utah, offers unique combination of higher education and applied research in water engineering with strong emphasis on research policy interface.

Project Director of USPCAS-W Dr. Bakhshal Lashari, while welcoming the guests and participants said that USPCAS-W is a state-of-the-art center which is equipped with modern water laboratories to carry on applied research on water sector in Pakistan. He said that water issues of the country will be solved by developing human capital in the sector which will bring prosperity among the people by boosting the economy of the country. Dr. Lashari further said that the diploma course of the Center is a golden opportunity for the irrigation officers to enhance their knowledge and skills in Spatial Data Management, Hydrological and Hydrodynamic Modelling, Flood Forecasting, Risk and Damage Assessment and in Post Flood Recovery, Awareness and Health Implications.

Center’s Chief of Party from University of Utah Dr. Mohammad Aslam Chaudhry, Deputy Director USPCAS-W Academics and Research Dr. Rasool Bux Mahar also spoke in the inaugural ceremony of the diploma course. There were 17 nominated officials from the irrigation department who will be taught in diploma course also attended the ceremony. 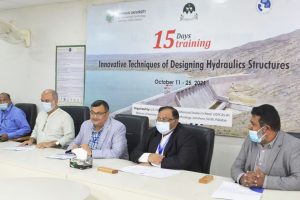