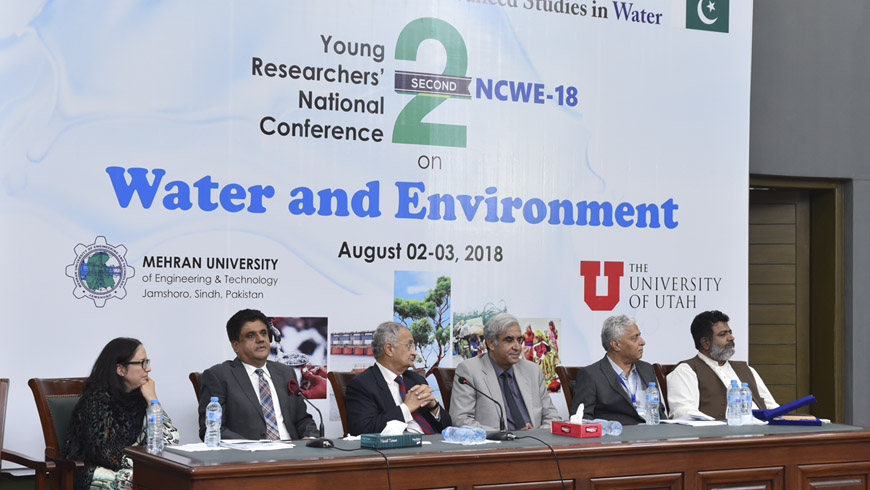 Only a knowledge-based society can bring socio-economic development with a people-centric approach where our National Water Policy 2018 and Climate Change Policy 2013 is thoughtfully and meticulously implemented and this is the way forward for us to be not only secure but sovereign country, This was expressed by Nisar A. Memon, the former Federal Minister & Senator, speaking as the Chief Guest at the closing ceremony of Two-Day 2nd Young Researchers’ National Conference on Water and Environment, held at U.S.-Pakistan Center for Advanced Studies in Water (USPCAS-W) at Mehran University of Engineering & Technology (MUET) Jamshoro on Friday. He said that water and environment is part of un-conventional security along with the energy and food; as such it requires national focus like the conventional security i.e. defence and defence production. He opined that globally, the water-environment-food nexus had assumed importance due to its role in the well-being of the people and living beings. “The security of people of Pakistan requires greater investment in all water environment institutions and infrastructure with merit-based governance.” he added. Mr. Memon said that Pakistan currently has the largest youth population of its history and quoting the United Nation’s Human Development Report said that, it has 64% of its 207 million population below the age of 30 and 29% between 15-29 years. “But our challenge is to nurture the youth and offer them the opportunities.” he observed. He said that the conference paved the way for the youth researchers to present their research work, learn from peers and participate in national research endeavors.

He further elaborates the exercised youth scientists will preserve, protect and promote the water and environment assets of about 7,250 glaciers and Indus basin the largest irrigation system in the world. He continued and said even though we contribute less to global warming of the environment, but we are a 10th most vulnerable country in the world regarding climate change effects. He also participated in a different technical session of the conference and appreciated the efforts of MUET Water Center for organizing such vibrant conference. Dr. BakhshalLasahri, the project director USPCAS-W MUET presented thirty-two (32) recommendation of the two-day conference recommending develop policies for regulating the use of groundwater, effective implementation of national water policy be made, to bring improvement in the irrigation system which can save water equivalent to one dam. While sharing the recommendation, he stressed on the institutional audit of the water resources be conducted on a periodic basis to help planners and administrative bodies to make informed decisions and on irrigation infrastructure be modernized and equipped to manage water resources properly. He also recommended for the promotion of behavioral change to reduce wastage of water by raising public awareness through media campaigns and incorporating water conservation lessons in syllabi/curricula at primary, secondary and tertiary levels. He further recommended that all the industries should install their waste treatment plants and water Conservation Technology may be adopted to save the water.

In the closing ceremony, the Civil Society Activist Zulfiqar Halepoto keeping the importance of the water and all the political parties have prioritized the water in their respective party manifestos. He said it is due to the sensitization of the community and water stakeholders by the academia like this MUET Water Center in the country. He further said the young researchers of the Center are doing the research on women issues like relation of water with the reproduction process, whereas, refereeing these women issues were taboos in the past, so through technology and new vistas of knowledge has wiped out the generation gap of learning in societies like ours, he added. Earlier to the closing ceremony, in plenary session Muhammad Abid, World Bank Water Resource Specialist delivering his presentation on Balochistan Integrated Water Resource Management and Development Project said that before implanting of the project one has to design and then refer the Project Development Objective (PDO). He said that under the World Bank titled project the 100 small dams are being development in a different location in the province as to provide the water for domestic and agriculture use. Engr. BeenaRiaz, Environment Specialist of Karachi Neighborhood Project (KNIP), Government of Sindh while delivering her presentation on Water and Environment said that Pakistan has the world’s fourth highest rate of water use is third among countries facing acute shortage of water. She stated four reasons behind the water crisis first population Growth, second rapid urbanization, third climate change and fourth poor water management. “More than 86 countries of the world are surviving on less water than us through efficient management”, she added. She suggested for climate change adaptation investing for building water reservoirs and plant more trees and also for adopting and implementing a strategy of water-pricing. Dr. Kamran Ansari, the conference convener speaking in the closing ceremony said that around 55 among 100 submitted research papers were shortlisted and around 50 young researchers presented their papers in the two-day young conference. He said that the conference was aimed at to provide an ideal academic platform to young researchers and scholars from all over the country to present, share and exchange their latest findings of water and environment-related issues. He further highlighted that the papers on different themes of the conference would to provide opportunities to delegates throughout the country to share their scholarly knowledge, skill, experience, and expertise with a focus on water, environment and shared challenges facing our current and future generations.

On the first day in the plenary session, Director General Pakistan Director General Pakistan Council of Research in Water Resources (PCRWR) Dr. Mohammad Ashraf said that if the ratio of population, urbanization, crop pattern will remain same then by 2025 Pakistan will reach to zero level as far as water is concerned. By referring to water loopholes, Dr. Ashraf said that poor coordination amongst policy, research and development institutions made the water situation worst. He said that complete neglect of construction of large reservoirs after the 70s deteriorated the water scenario. He further elaborated that the reduction in storage capacity of the existing dams due to sedimentation is increasing day by day and only in Tarbella 6 million residuals are being stored on a daily basis. “A resource conserved is a resource generated,” he added. He disclosed the impact of mismanagement water resources pave the way for groundwater depletion, water quality deterioration, desertification, food insecurity and ultimately increase in poverty. He also suggested to recharge the groundwater aquifers, conserve the soil moisture, to manage the existing available water resources and to educate the people. He further suggested that along with water experts and managers, the institutes should prepare water diplomats who can speak and debate on water issues argumentatively on the national, regional and international forums. His emphasis was on the effective control on population growth, rapid urbanization, crop pattern policy for effective water conservation.

IUCN Country Head Mahmood Akhtar Cheema referring the Pakistan Natural Conservation Strategy said that Pakistan is one of the lowest vegetative countries in the world and so face difficulties to adopt the climate changes. He emphasized the catchment protection, integration of natural resources management, vegetation cover and focused on the target initiatives. He further mentioned the IUCN initiatives for the vegetation of the country and informed that with efforts of IUCN Astola in Balochistan is the first Island in Pakistan which is marine protected. “A just world that values and conserves nature,” is the mission of IUCN, he added. He further shared IUCN initiatives for water conservation in Pakistan and efforts for the formulation of provincial natural conservation strategies.

Project Coordinator Water Sector Improvement Project, Planning and Development Department Government of Sindh, Dr. Fateh Marri said that water seems the top priority of the future government in the province and also the efforts are being made for the for the formulation of provincial water policy. “Climate change is not only a threat but an opportunity as well if we could avail it efficiently and effectively,” he added. He further said that knowledge comes from the habit of doing things excellently, like the habit of hard work, the practice of taking the challenge as an opportunity, and a pattern of being committed. He appreciated the efforts of the MUET National Water Center for preparing young generation who has sought the sustainable and cost-effective solutions to water challenges of the Country. Vice Chancellor MUET Dr. Mohammad Aslam Uqaili also spoke on the first day, and Dr. RasoolBux Mahar, Deputy Director of USPCAS-W MUET, chaired the plenary session on the day first and also presented the vote of thanks in the concluding ceremony. On this occasion appreciation shields and certificates were presented to the paper presenters, session chairs, the secretaries, organizing and other different committees. 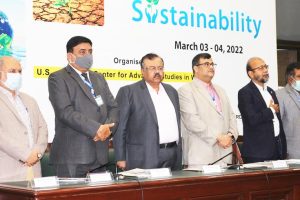 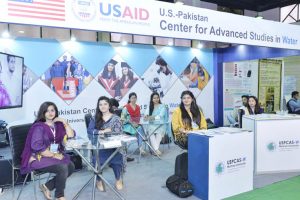 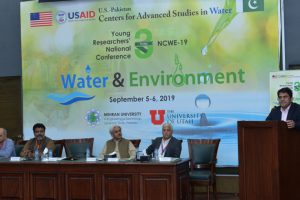